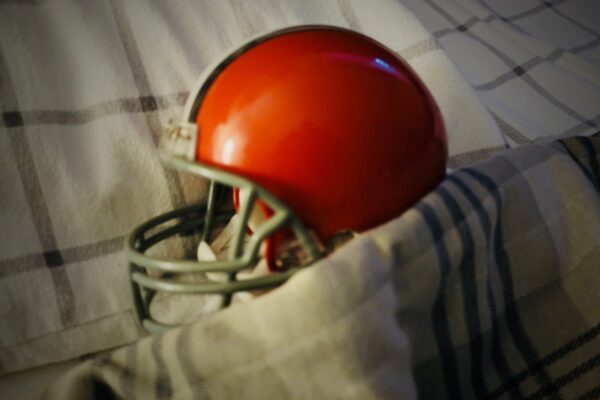 I just found out that some rich guy named Jack purchased the First Amendment and is forcing his “facts” – that Super Bowl LV will be played between the Kansas City Chiefs and Tampa Bay Buccaneers – on a gullible world.

Let me tell you how it really is, straight from my pillow’s mouth. My pillow, which I affectionately call “Q,” has prophesied that the winner of Super Bowl LV will be the Cleveland Browns.

My pillow has been kicked off of Twitter, and the media is laughing at me.

Jack is mean. The media is meaner.

I bought my pillow because I was promised a great night sleep but now I am frightened every night, hugging my pillow like a wannabe dictator hugs a flag, because only my pillow knows the truth about the Super Bowl.

And now I know too, and I can’t sleep.

As for the game, my new partner Marjorie Taylor Greene, who now has time on her hands to help with this column, used to always say that the Cleveland Browns are going to win the Super Bowl.

But she was forced to apologize.

Now she says that Patrick Mahomes is obviously way better than Tom Brady, who is obviously the greatest of all time, the GOAT.

But right now, this year…. Patrick Mahomes is better.

Except in this this game, she said. Never bet against Tom Brady.

According to the so-called fact-checkers in the lamestream media, the Cleveland Browns are not in the Super Bowl.

Jack and the fact checkers, which is the name of the cover band I am in, demand that I say the Kansas City Chiefs are playing the Tampa Bay Buccaneers in this year’s Super Bowl.

Here, in case the lying media is right about who is playing in the game,  is What’s Gonna Happen.

Pregame: CBS interviews Joe Biden and Americans realize this is the first time they have thought about the President since January 20. Prior to that, a traumatized nation thought about the then President 25 hours a day. When the interview is over, no one, including Joe Biden, remembers what he said.

Coin Flip: Joe Biden tosses a $1.9 trillion coin in the air. The Buccaneers win the flip and defer because Tom Brady says that’s how you win Super Bowls. In the commotion, the coin is misplaced.

First Quarter: On the first drive Patrick Mahomes calls the same play three times in a row and the team drives 80 yards for a touchdown. The play is called, “Defer This!” Travis Kelce has three catches for 80 yards. The Buccaneers are able to scratch out a field goal, but stall immediately in two other drives. The Chiefs also stall. A sideline reporter talks to Bruce Arians for 15 seconds. Arians says, “Tom Brady stinks so far. I kind of miss Jameis Winston.” Chiefs 7, Buccaneers 3

Second Quarter: The second quarter belongs to the Chiefs, while the Buccaneers offense can’t get going because Tom Brady is too harassed by the Chiefs defense and by Bruce Arians. “Maybe he can’t succeed without Belichick,” says Tony Romo. Tyreek Hill scores two touchdowns. Romo says, “I think that was Hill. Not really sure. It was a blur.” At the end of the half, Brady throws a pick 6. Chiefs 28, Buccaneers 3

Halftime: I don’t know The Weekend from Monday Morning, so it’s unclear what to expect. Also, get off of my lawn.

Third Quarter: Scotty Miller is a hero for the Buccaneers, bailing out Tom Brady on third and long twice. Plus Miller scores one of the Buccaneers three touchdowns. Patrick Mahomes gets sacked twice.  When Tom Brady throws his third touchdown pass in the third quarter, Romo, in love, has an on-air sportsgasm. Chiefs 28, Buccaneers 24

Postgame: Bruce Arians says Tom Brady is going to have to compete for a job next year. “I will have to evaluate everything,” he says with confetti hanging off his nose. Brady uses the word, “fun” 12 times in 30 seconds. Rob Gronkowski smokes a blunt while holding the Super Bowl trophy.

This column is sponsored by the horror movie, “The Second Insurrection” from director Josh Hawley