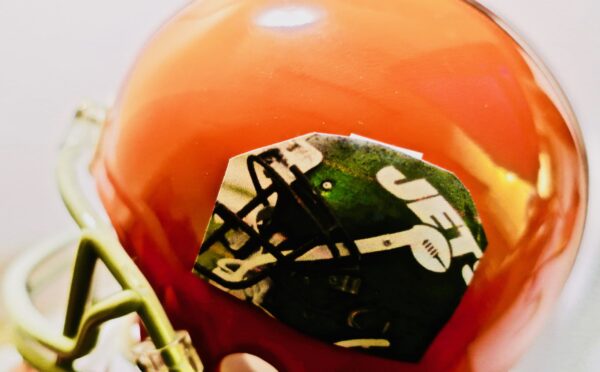 These week 8 NFL picks, having already voted in every state and half of Canada while wearing a Cleveland Browns jersey, now plan to do it again in every state 31 more times the other 31 NFL jerseys.

You’re doing that too, right?

As the only person on the planet wiser than me, Mr. QAnon, says, Where we go one, we go all.

And I was told by someone who knows Mr. QAnon that the only way Joe Biden could win the presidential election was through massive voter fraud. So I am going for it. Massively.

Yep – where we go one, we go all.  So let’s all go vote in every state in a New York Jets jersey. Sure, it smells. Wear your mask.

Look, here’s the deal: This is simply a sacrifice one must make for love of country. We must wear the uniform proudly, and do the dirty work fighting fascism like generations before us.

The orders have come in from George Soros. He’s paying each of us thousands of dollars. Watch your mailbox, if you still get mail.

Back to the massive fraud plan…

So the way I did it was I started by wearing the jersey of favorite team, the Cleveland Browns, to all the voting booths and then I went straight to the bottom and got the Jets and Giants humiliating experience over with.

I saved the Kansas City Chiefs jersey for my last round through the 50 voting booths. I was such an experienced fraudulent voter by then that I even threw some no-look votes, just like Patrick Mahomes himself.

So please everyone, vote early and often.

Wear a different NFL jersey each time you vote in order to disguise your identity, because no one on Earth would confuse a Kansas City Chiefs fan with a New York Jets fan. These are different people entirely – much like a Biden voter and a Trump voter.

Maybe all the real votes will actually be counted.

We shouldn’t need to do any of this if that’s what’s gonna happen.

This column is sponsored by Electoral College dropouts